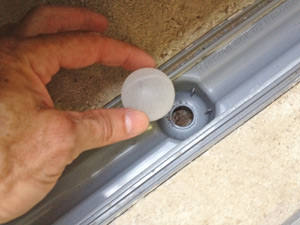 Trench drains are useful in the battle to control unwanted water, but they never have been able to deal with radon until now.

Unfortunately, trench drains have had the unintended consequence of allowing air from drainage channels and from the ground into the home. This air from the ground may contain hazardous radon gas, a naturally occurring radioactive gas. There are approximately 8 million homes in the U.S. with radon levels deemed dangerous by the Environmental Protection Agency.

Balls of the right weight and size block gases from escaping through the holes when there is no water in the drain. When water flows, the balls float so water can drain.

TrenchLock™ trench drain inserts are specially designed by Basement Systems to block unwanted ground air and gasses from entering the basement and ultimately your home. TrenchLock™ is an insert that can be installed in an existing trench drain that lets water down but does not allow air to come up through an innovative patent-pending design.

Ideal for homes with a radon mitigation system